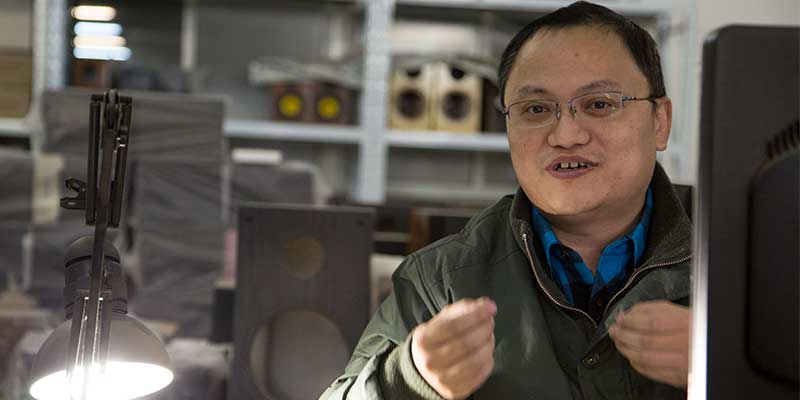 Xiaohui Zhou develops audio equipment in his workshop on the top floor of a former warehouse in a district on the outskirts of Shanghai. Zhou used to work at Panasonic, but he didn’t like being a small cog in a global corporate machine. This led him to set up his own company, Happy Buying Electronics.

It is winter. Zhou and his employees are wearing coats; the room is clearly not well heated. Zhou hacks the internet for blueprints from around the world. He buys, dismantles, and analyses high-end devices from global brands. He meets discreet, enterprising disposal contractors on the fringes of highly toxic electronic scrapheaps. There, he purchases high-tech components that have been removed from hardware such as European hospital equipment and have an estimated lifetime of 30 years. Original devices are too expensive for the Chinese market, says Zhou, and buying new components is not an option.

Zhou explains that a premium amp from his workshop costs the equivalent of €1,400. An imported, brand-name amp of the same quality would cost €15,600. His pride, though, does not lie with the price, but with the sound quality of his products. His motto is “better than the original.” Zhou: “We have to be better – not a bit better, but a lot better.” He has no qualms about orienting himself toward products on the global market. There is no need to reinvent something that has already been invented, so instead Zhou copies and refines it. Other manufacturers then copy his products and change them again. In turn, Zhou takes their advances and incorporates them into his equipment. This system follows the Chinese recipe: there is no original, only never-ending progress.

The one thing Zhou is missing now is a wife. She would have pitch in, and beauty is not a requirement. “I’m no Adonis, after all,” says Zhou, pragmatically.

“This is my DM100. The blueprints came from the Gryphon, a high-end Danish amplifier. I built an identical version. It costs €600. The original Gryphon amp costs many times as much as that. The casing is inspired by the Swiss amps made by Goldmund. It’s relatively expensive, as it’s a classic casing. As for the technology inside, I’ve adapted it to suit Chinese needs. It’s very good. My customers want to know exactly which amp I used as a template. That gives them a good feeling.”